This is a listing page for Solar Hot Water Heating  Contractors in your area.

Some brief information on Solar hot hater heating.
In this renewable method of generating heat, energy is extracted from the Sun's rays via roof-mounted solar panels. The solar panels heat a liquid which is contained in a closed-loop pipe system. The liquid flows through the pipe and enters a copper heating coil in the hot water storage cylinder. The surrounding water in the hot water storage cylinder gets heated by the coil.  It should be noted that Solar Hot Water Heating is virtually free after installation.

These consist of a flat solar plate made up of a solar absorber material, typically silicone. This is housed in a rectangular box with a glass top and an insulated bottom. Flow tubes sit on top of the absorber solar plate connected to an inlet pipe at one end and an outlet pipe at the other.   The pipes are filled with an antifreeze solution. 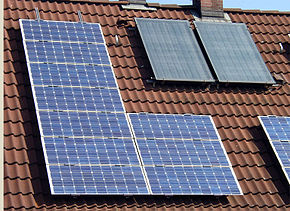 The most important thing to be aware of when investing in Solar hot water heating Systems is to keep it maintained. Every two years replace the antifreeze fluid.   Panels are prone to major damage during extremely cold weather if the antifreeze is depleted. Also, make sure the flat plates and tubes are kept clean. Occasionally weather systems develop in Sahara regions and find their way as far north as Ireland and the UK. This may result in a thin coating of red dust which should be removed from the solar panels to ensure maximum efficiency.

Solar panels should be oriented to the south. Southeast facing or southwest facing is also acceptable.  Peak sun, during daylight hours, is experienced when the sun is at right angles to the plates. In the case of the evacuated tubes this will occur several times from sun rise to sun down.  However, the amount of solar rays will vary from one end of the day to the other and from one end of the year to the other.  When the sun is highest in the sky the flat plates will gather more solar energy. But the evacuated tubes receive incident light where the rays are at 90 degrees to the some part of the tube many times a day.

For more information on Solar Hot Water see the Which guide to purchasing solar water.  For more technical information see the SEAI Homeowners guide to Solar Thermal.  You should also investigate the feasibility of installing Solar PV while evaluating the pros and cons of solar hot water heating systems